Kids, don’t try this at home.

Generally I am not a confrontational person, but nor am I a wallflower.  I try to be kind, generous, and to do unto others, blah, blah, blah.  I believe in teaching my children integrity by setting a good example for them.

But sometimes I can be a b*tch.

Like many moms, the minute my boys get off the bus it’s go time.  On Wednesdays, we have art class, then cub scouts, then choir practice, and sometimes we have baseball practice mixed in there.  My Swagger Wagon is my mobile office.  I try to be a courteous, considerate driver; I allow people to merge and to make left turns in busy traffic, and I always wait my turn.

Our route home from art class takes us on a windy, narrow road that has no shoulders.  We were having a pleasant evening drive (meaning the kids were watching a video with headphones on and I was listening to a station other than Radio Disney) and I was driving the speed limit.

The vehicle behind me was becoming increasingly aggressive.  He began following me closely and eventually he flashed his lights at me and honked his horn.  Naturally, I became Johnnie LawFollower and made sure I drove EXACTLY the speed limit as I watched him give me the universal hands-up sign for "WTF" and an incredulous shake of the head.

We came up on the light at a major intersection, and I knew from experience that the red light would follow a long cycle and that we’d be sitting there for a few minutes.  I checked out my rearview mirror, told myself don’t-do-it-don’t-do-it-don’t-do-it . . . . put ‘er in park, and told the boys to sit tight.

I walked back to the car behind me (picture John Wayne, complete with thistownain’tbigenoughforthe2ofus whistling, except with staticky hair and orthopedic Danskos) as the obnoxious driver looked up from his phone long enough to fiddle clumsily with his window putter downer.

“You know this is a MINI-VAN, right?  It’s NOT a Porsche,” I explained, pointing to my vehicle, because apparently he was unaware of the physical logistics of driving an automobile of the grocery-gettin’ variety. 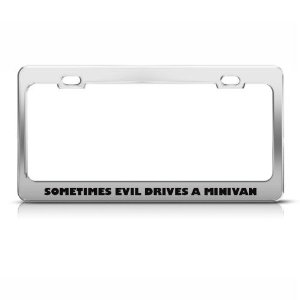 “Yeah, I get it.”  Quite the forensic debater, this guy.

“And my BABIES are in this car?” I continued.  Mama Bear’s claws were out.  I’m sure my eyes were all bugged out, and I may or may not have bared my teeth.  “There is NO need to flash your lights at me or to honk your horn.”

“I didn’t flash my lights,” he insisted.  Did so, did so, did so.  “I did honk at you, but only because you braked during the turn.”   Um, there was another car in front of me, Jack@ss.

I closed my argument with an emphatic, “Mini. Van.” and walked back to the Swagger Wagon, like a Boss.

I should not have engaged this man in conversation, especially when any idiot with a free Saturday afternoon and directions to the Moose Lodge can own a gun these days.  And I certainly did not behave in a way I would want my children to emulate.  To you, Mr. Honky Flasher Guy, I apologize for making you the brunt of my self-righteous Mommy rant.  I will be more tolerant of bad drivers.  Starting tomorrow.

Posted by boymommynyc at 9:39 PM 1 comments

The Recorder: Next Stop, Carnegie Hall!

The day has arrived.

It’s a rite of passage that all 4th grade parents dread.

No, it’s not the family life / sex talk at school, it’s not frog dissection, and it’s not addition and subtraction of fractions.

Large brought his recorder home from school yesterday.  I knew this day was coming . . . we pre-ordered the recorder and he decided he wanted a red one with a blue strap.  Now if that is not the epitome of cool, I don't know what is.  Can’t you picture James Dean with a red recorder hanging from a blue strap around his neck?  Or Pink, or Lady Gaga, or Madonna?

Large proceeded to play me a “tune” on his recorder.  Apparently it was “Hot Cross Buns” but it sounded like one of the following:
a.  someone swinging cats around in a pillowcase
b.  a raccoon who is giving birth
c.  a drunk piccolo player
d.  a cat-swinging, pregnant, drunk raccoon playing piccolo
Large was so excited about his recorder, I almost felt bad for telling him to “please make it stop.”  I suppose a good mother would have told him it sounded lovely, but I just didn’t have it in me.

Lest you think I’m exaggerating . . . Large told me “one of the deaf kids in class was almost crying because it was hurting his ears.”  At the risk of being insensitive, it’s not a good sign when the kid who can’t hear starts feeling thankful that he only has four fully-functioning senses.

I don’t know how the elementary school music teacher makes it through her day without hittin’ the sauce.  God love that woman.

Posted by boymommynyc at 4:58 PM 1 comments

Email ThisBlogThis!Share to TwitterShare to FacebookShare to Pinterest
Labels: the birds and the bees

Skinny Girls at the Gym: An Analysis

I am continuing my quest to lose 40 lbs. by the time I turn 39+1 in September.  I have been checking out my "physique" in the aerobics room mirror, and I have decided that there are certain stereotypes perpetuated by gym members.

1.  The Fat Girl.  She (hypothetically, of course) is the red-faced girl who cringes every time the instructor says to “engage those abs.”  Um, if I (I mean SHE) could do that we wouldn’t be here in the first place, now would we?  Also, I don't do lunges because
a.  my knees hurt and
b. when I do lunges I look like an ostrich doing the Charleston
She's double-bagging the sports bras and still worries about her boobs hitting her in the eyes and knees during particularly aerobic exercises.  Picture Tyler Perry's Madea doing jumping jacks; you get the idea.

2.  The Overachieving Pregnant Girl.  She continues working out during all 9 months of her pregnancy.  Perhaps if I had worked out instead of feasting on that 5-lb. bag of Tootsie Roll Midgets my Mother-in-Law bought me at Costco . . . man, I love that woman . . . I wouldn't have gained so much weight during pregnancy.  My advice to you, Overachieving Pregnant Girl?  If this is your first pregnancy, you’re gonna wish you’d taken a nap instead of stuffing that belly into spandex because that first week of new babyhood is the great equalizer; no amount of exercise is gonna change the fact that you’re an emotional time bomb, your teeth have 3-days-worth of gunk on them, and you haven’t washed your hair since sometime last week.  Tootsie Roll Midgets sound pretty damn good right about now, don't they?

3.  The Supportive BFF.  She is your gorgeous, skinny, in-shape friend who reminds you that you’re on the right track / getting to the gym is half the battle / you’re getting healthy, etc.  And sometimes she takes you to Starbucks after you leave the gym.  We love her.  But sometimes we wish she was fat. 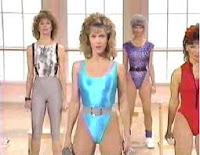 4.   Jane Fonda.  This is the woman who has decided that after a 20 year sabbatical, she’s gonna get back in shape.  She pulled out her spandex, her fluffy socks, and her braided headband and programmed Olivia Newton John’s “Let’s Get Physical” on her ipod.  Stand next to her; you’ll look good.

5.  The Weight Lifter.  You know how everyone else in the class has weights ranging in size from  2.5-5 lbs?  She’s got the 10 pounder, and still acts as if she’s not being challenged.  B*tch.

6.  The Regular.  She never misses a class, and sometimes she sticks around for the next class.  I’m drenched in sweat and have jello legs, but she needs another hour of physical exertion.  Apparently she doesn't have the Mt. Everest of laundry waiting for her at home.

7.  The Non-Sweater.  While I am feeling my pulse and praying that my heart doesn’t explode right in the middle of the gym floor, she’s barely breaking a sweat.  This is a blessing in disguise, however.  When I have a heart attack, I’m pretty sure she’ll have the energy to run and get the defibrillators. 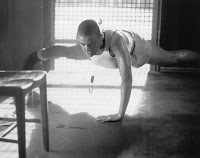 10. The Former Marine.  I’m doing girly push ups and silently repeating the mantra my arms will not give out causing my face to slam into the floor, and she’s going all Demi Moore G.I. Jane.  This is probably the same woman who just competed in the Tough Mudder – the race where contestants compete in a muddy obstacle course for the purpose of . . . well, I don’t know what the purpose is.  I just know that I don't like getting persweaty, so you can be damn sure I don’t like rolling around in the mud like a prized swine.  Makes me think of all the laundry I’d have to do afterwards.  And bacon.
Posted by boymommynyc at 9:18 AM 2 comments