I don’t consider myself to be a confrontational person.  I’m no shrinking violet, but I need everyone to like me and part of having people like me is . . . well  . . . not making them mad at me.

Sometimes I just can’t keep my yapper shut though.

Our son, Large, plays on a travel baseball team that has many different age levels.  Last weekend, Large’s team (11U) and the 9U team played in the same tournament.  Once our game was over, Large’s entire team decided to root, root, root for the 9U team at their game.

While there are no written rules regarding where one should sit when watching 9-year-olds play baseball, generally spectators sit on the “side” that their team is on.  As we were waiting for the game to start, a woman, whose TONE I did not appreciate, asked me huffily, “are you watching this game?”

The game hadn’t started yet as the field crew was watering the infield, and my interaction with this woman was new, so I was not yet irritated with her.  I was confused about what she was asking me, however, because there was no game being played.  Was she seeing Angels in the Outfield?  Was Kevin Costner talking to Shoeless Joe in a cornfield and I just couldn’t see it?


I looked at the field and said kindly, (because at this point I was still feeling kind,)
“there’s no game going on right now.”

Clearly irritated, she asked, “do you have kids on this team?”

I thought she was making idle chit chat, so I said, “no, we’re the 11U team and we just came to cheer on our 9U team.”  I might have even thrown in a smile.

“Well, we came a LONG way to not be able to sit and watch our kids play,” she snapped.  “It would be nice if there was someplace for us to sit.  Why don't you go down there,” and she pointed to some spots down the way.

I asked our boys to move down so that they weren’t taking up as much space on the bleachers.  I noticed, however, that she and her daughter-in-law (who remained silent throughout the entirety of our interaction) were the only two people in the stands.  (Probably because she was sitting on OUR side, but alas . . . )  The rest of their team’s spectators had brought their own stadium chairs and were sitting in prime real estate behind the batter’s box.  Some of them had gone to a little patio area on the first base line on the opposite side of their team’s dugout, and none of them seemed put out that we were taking up space on our own bleachers.

She got up to get an over-priced drink at the concession stand and was clearly disappointed to find me still sitting in the stands when she returned.  She slammed her foot down as she stepped on to the metal bleachers; I’m assuming it was to announce her arrival. 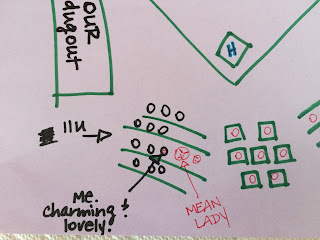 Whatevs, I thought.  The game started.  So did her passive-aggressive comments to her daughter-in-law, obviously for my benefit.

1.  Alex S. had a good hit.  Ryan S, his brother, is on our team.  I mistakenly yelled, “nice hit, Ryan,” and the kids playfully reminded me that ALEX was the one who got the hit.  “She doesn’t even know their names,” she WHISPERED to her companion.

2.  A player on her team hit a ball way out into center field and our player was unable to catch it.  “Awwww,” she chirped sarcastically, “he didn’t catch it.”

3.  A mom from our team yelled, “nice try” to one of our players, to which she commented, “not good enough!”

Finally she said to her daughter-in-law, “at least they found a place to sit to watch the game,” referring to the spectators from her team.

I had had enough.

“Is there someone who needs to sit here?” I asked.

I didn’t take a road trip over the Bay Bridge on the Friday afternoon of Memorial Day weekend with a little detour through Annapolis on Naval Academy graduation day just to have some busybody question my motives.

“Excuse me?”  Oh, I’m irritated now.  “You have no idea where we traveled from.”  You see that?  I was so angry I ended a sentence with a preposition.

“Stop talking to me.”

That was the end of our conversation.

One of our moms, who had no idea that any of this had transpired, asked my nemesis if she could move one of her bags (which were sprawled all over her “area” of the stands) so that she could sit down.  The old lady obliged . .. by grabbing her bag dramatically and slamming it on the seat in front of her.
Then another mom, also unaware of the conversation, commented sweetly that she was unfamiliar with this rival team and she wondered where they were from.  Somewhere far, far away, no doubt.

And then our 9U team won the game.  So there’s that.

Posted by boymommynyc at 9:43 AM 0 comments