Where the Heck are Max and Ruby's Parents?

Small goes through stages where he becomes obsessed with one television show and wants to watch it over and over and over.  And over.  His current obsession is Max and Ruby, a cute little show about a rabbit and her little brother, Max.  It’s all explained in its catchy opening jingle:

What is NOT explained is this: where are Max and Ruby’s parents?  They visit with Grandma periodically, and there are several other adults in their lives . . . Bunny Scout Leader, Mrs. Huffington, Mr. Piazza, etc., but no parents.  Naturally I’m curious about this and I’m wondering if the cartoon version of Child Protective Services needs to be notified.

Theories Regarding the Whereabouts of Max and Ruby’s Parents:

1.  Mister McGregor caught them in his garden, and the rest is too bloody and gory to share on a family show.

2.  Grandma was a late bloomer, and actually Max and Ruby are HER biological children, though this does not explain why they don't live together.

3.  Given the current state of our economy, Mrs. MaxAndRuby’sMom had no choice but to move out to Hollywood and become a Bunny of the Playboy variety.

4.  The giant tarantula that scares Max at sleepytime actually exists, and it ate Mr. and Mrs. MaxAndRuby’sParents.

5.  Mr. and Mrs. MaxAndRuby’sParents got tired of Ruby’s know-it-all attitude and decided if she’s so smart she can raise her d*mn self. 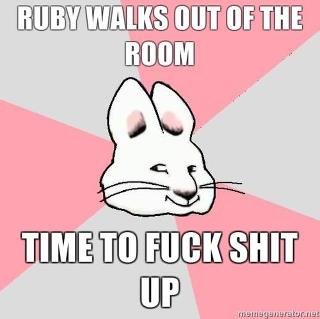 7.  Mischievous Max put them somewhere.  Like under the floorboards.

Max and Ruby is the lesser of MANY cartoon evils.  I'm okay with a little Do-It-Yourself Child-Rearing as long as the show itself doesn't make me want to stick pickle forks in my ears (Caillou) or blaze up a doobie (Yo Gabba Gabba.)

[ps, I got these images from my google-machine.  I don't own them.]

Posted by boymommynyc at 5:52 PM

Email ThisBlogThis!Share to TwitterShare to FacebookShare to Pinterest
Labels: Max and Ruby, Small