Do Me a Solid.

That is all.  Happy Monday to you.

Posted by boymommynyc at 10:50 AM 0 comments

Email ThisBlogThis!Share to TwitterShare to FacebookShare to Pinterest
Labels: Hubby, it's gross. Why is it so gross?, Laundry, list, poop

I Hate Myself for Even Mentioning This . . .

You know how I’m always saying that we shouldn’t judge other people because we all have our sh*t and we’re all doing the best we can? 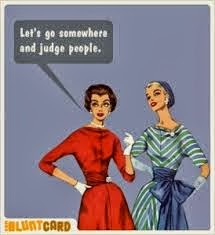 Fasten your seat belts, y’all.  I’m about to get all judgy up in here.

I realize that USA Today does not have the same prestige that CNN has, so I apologize for the complete irrelevance of this post.   I read a disturbing story last night on USAToday.com about Chris Brown and I must vent.  You will remember Chris Brown for
a     A.  his contributions to the world of music
b     B.     his philanthropic nature
c     C.     his wholesome boy-next-door image
d     D.  the fact that he beat the crap out of a girl

Apparently he’s some sort of rap “artist” who thinks he is a gift to his industry.  While I, as a suburban housewife, do not claim to be an expert on the genre, I believe with all sincerity that Jay-Z is a rap artist.  Snoop Dogg (or Lion or Hedgehog, or whatever he’s calling himself these days) is a rap artist.  Even Kanye is a rap artist, and it PAINS me to say that, because, (since I'm being judgy,) he's an idiot.  I cannot name one song by Chris Brown; the only reason I even recognize his name is because of the notoriety he gained by beating up his girlfriend and then shrugging it off as collateral damage from a passionate relationship.

I really hate to even give him any room in my already swirly brain, but last night I read an article in which Chris Brown claims to have lost his virginity at 8 years old to a 14-year-old girl.  He claims he was sexual at an early age because he watched a lot of pornography and “it’s different” in the rural area of Virginia where he grew up.  Also, he’s so good at “it” because he’s been practicing since he was eight.

Here’s where I get all judgy:

Am I the only one who feels that Chris Brown should be voted off the earth?  In the spirit of finding-the-good-in-all-of-us, I ask WHAT has he contributed to society?  He is an embarrassment to the male gender and his endless narcissism is ridiculous.  When I was eight, I was playing with Barbies, and when I was fourteen I looked like this: 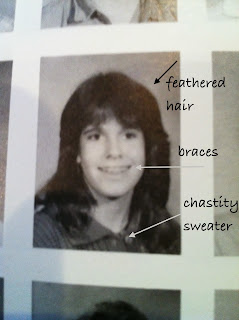 He was doing "that" at eight, with someone who was fourteen?  It's disturbing on so many levels - the perversion of it, the lack of supervision, the absence of remorse or regret, the warped psychology . . .

Chris Brown needs to be knocked down a few pegs.  I don’t mean in a harmful way, but in a Scrooge-on-Christmas-Eve kinda way – where he could see himself as others see him and have a chance to experience a little humility.  Perhaps as he matures he’ll develop some integrity, but I’m not hopeful.  He needs to grow up.  He needs to learn what it takes to have character, how to act responsibly, especially when one has a platform such as his fame, and to treat others as they deserve to be treated.

Meanwhile, in Suburbia, I hate myself a little bit for even writing about this.
Posted by boymommynyc at 2:37 PM 1 comments