I Set the Elf on Fire.

I set the elf on fire.

It was an accident, I swear.

I’m sure, by now, you’re aware that there are OVERACHIEVING moms, some of my girlfriends included, who keep making the rest of us look bad by posing their elves in clever positions to the delight of their young offspring.  I’m not that mom.  I am the mom who jolts awake after being in bed for an hour because I realize f*ck, I forgot to move that damn elf.

Neeny has been with us for several years and he is THE most effective bad behavior deterrent in the history of bad behavior.  He magically appears when we return from our Thanksgiving travels and he doesn’t leave until he returns to the North Pole with Santa on Christmas Eve.  Last year, when the boys’ behavior was bordering on Naughty, Neeny didn’t return one morning, but he left a note that explained that he had returned to Santa and had reported on their Naughtiness . . . and perhaps Santa would give them another chance if their attitudes improved and they listened to their mama.

Can you picture me doing my best Dr. Doofenshmirtz laugh and wringing my hands like an evil cartoon villain?

Sunday night, I actually remembered to move Neeny.  I put him in the playroom inside a lamp, figuring he’d be safe since we rarely use the light in that room.

Lo and behold, Medium decided he wanted to use his easel so I turned the light on for him, forgetting that Neeny was sitting directly ON the lightbulb.  I walked in about an hour later to turn off the lamp after Medium had cleaned up, and I smelled something odd.  Sniff, sniff.  Hmmmm.  Sniff, sniff.  It smells almost like plastic burning.

I rushed over to the lamp to grab Neeny without anyone under 10 seeing me do it, but he was fused TO the hot lightbulb.

I turned off the light and peeled him off the bulb, but alas, he had a giant, charred, steaming black hole where his little plastic tummy should have been.  I almost burned a hole all the way through his felt, cotton-stuffed body.  I blew on him like I was trying to cool down microwaved mac and cheese.  Once he stopped steaming, I threw him behind a picture frame and prayed the boys wouldn’t notice he was missing. 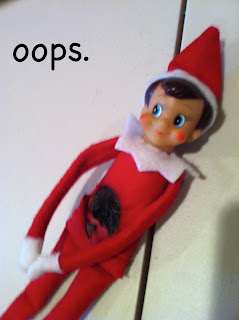 Hubby arrived home from work and I announced that I had to go to Target.  “Neeny caught on fire.  Explain later,” I called as I headed out the door.  No worries, I thought.  I’ll buy a replacement at Target, put him in the same spot and the boys will be none the wiser.

Target was sold out.

Not time to panic yet, but I will admit that my armpits were feeling a little persweaty, I could feel my face getting red, and I lost all ability to take a deep breath.  I asked the salesperson if there were any more in stock “in the back.”  You know, the magic “in the back” where they store all the hot items so they can feel like heroes of The Right Stuff proportions when they burst through the swinging doors with whatever product you can’t live without?  No luck.

I knew I had seen them in other stores, but I needed one, like, yesterday.  I sent out a mass email to all the moms in my neighborhood via Google groups.  I headed to another store to look, and when I asked the sales representative if they sold the Elf on the Shelf, he answered me with a confused look as if I had just asked him if I could borrow a kidney, and said, and I quote, “a wha?”

Has this guy been living under a rock?  Does he not have his own Pinterest account?  Is his self-esteem not reliant on his creativity and his ability to Edward-Scissorhands several craft projects at once?

The next store was the same story as I encountered a young sales associate who obviously has not been inducted into the secret sorority whose mascot is a creepy plastic doll dressed in non-flame-retardant clothing.

At this point I had visions of myself in my basement at 2 in the morning, sewing a tiny little coat for Neeny so that I could hide his GIANT GAPING HOLE.  At the 4th store I started to panic as I mentally documented how my colossal failure as a parent was going to scar my children for life, robbing them of their innocence, their belief in magic, their faith in humanity, and essentially ruin their very childhood. 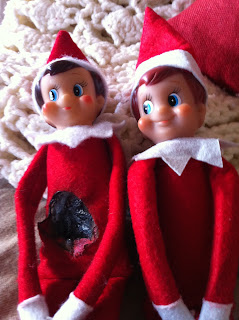 And then it happened.  A mommy in my ‘hood emailed that the elf freaked her kids out and that I could have theirs, for free, and that it was sitting on their front step just waiting for a new home.  I double-checked that it was the older, skinnier, scarier elf and not the newer, chubbier, more cherubic-looking elf, which simply would not do.

The BoyMommy family is again in ownership of an Elf on the Shelf.  Apparently he got his hair did last time he went to the North Pole as he now has reddish hair.  You know what he does NOT have?  That charcoal smell.

Posted by boymommynyc at 5:55 PM