Motherhood is like being a hamster on a wheel; you're running as fast as you can but you're getting NOWHERE.  Hubby and I were talking last night about how frustrated and restless I feel, partly because there's no end-product to show for the work I do during the day.  The "product" will be adult children who are contributing members of society.  Or at least not in jail.  Is it revealing that I feel that I don't need to have my children attend Harvard, but I teach them at an early age that they are NEVER to ride in the back of a police car?  Perhaps my expectations are too low . . .

I've been increasingly frustrated lately with the Facebook/Pinterest phenomenon.  It's a given that Mark Zuckerberg invented stole the idea for Facebook in order to make me feel inferior to 391 of my closest friends.  Pinterest is like Facebook on crack.  Apparently every other mother in the universe has time to make "busy books" for their toddlers using leftover scraps of fabric, no doubt from the adorable ruffled pajama bottoms they made yesterday.  Then she makes a delicious, nutritious meal from THE best (!!!) Mac & Cheese recipe ever.  And finally she makes teacher appreciation gifts using nothing but vinyl, burlap, and an old egg carton.

I am a complete failure.  THIS is what I could add to Pinterest:

Board:  FOR THE HOME 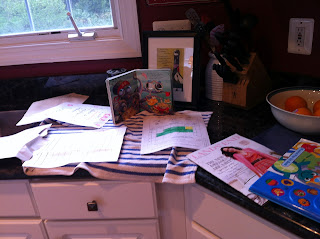 Decorate your countertop with homework papers, mail, and board books that are being aired out after your toddler climbs on the kitchen table and spills Mommy's Precious coffee on them. 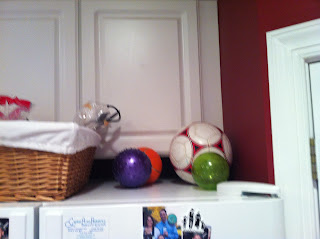 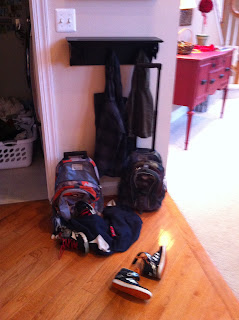 Add a three-hook shelf (one for each child) by the door, where your children will hang their coats and backpacks and neatly line up their shoes.  Just like at my house.

Board:  FOR THE HOME 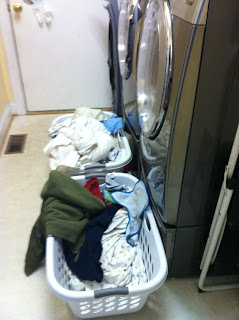 Decorate your Laundry Room.  With laundry.  Piles and piles of laundry. 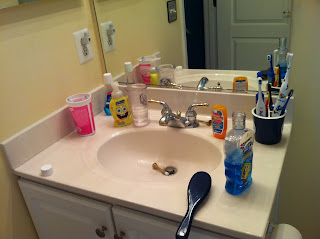 Need a convenient location to store those pesky door stops?  How about the bathroom sink?  Notice 5 toothbrushes for 2 boys, an accident waiting to happen the cap off the mouthwash, and toilet paper still on the roll because they don't use toilet paper. 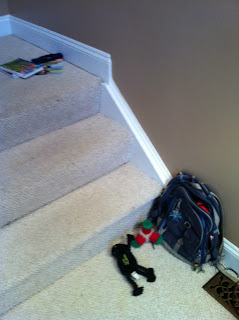 Help me out mommies.  I know YOU, of all people, know what this is.  Is this or is this not the universal signal for take your sh*t upstairs?  It's simple.  You need not make a special trip; just grab your stuff on your way up.  I took this photo on day 3, folks.

I realize I have done you a disservice, mommies, because now you feel the added pressure to run your household as efficiently as I do, and for this I apologize.


Posted by boymommynyc at 9:09 AM 8 comments

Though I am not a fan of the rhetorical question, especially since Carrie overused it on Sex and the City, I have one of my own.  Except I really want to know the answer. 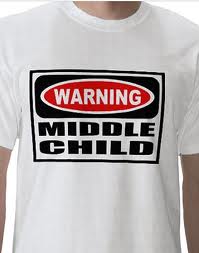 How do you build your child’s faltering self-esteem without coddling him?

Medium is having a tough time these days.  First grade has been a difficult year for him, what with the SATs and the college admissions process and all.  What?  Oh, that’s later?

The principal called me once at the beginning of the year for a minor infraction at school.  Apparently Medium told a classmate “I’m gonna kill you,” the way 1st graders do.  But this is 2012 so the administration must take everything seriously, and I don’t blame them.  They handled it professionally, but I am happy that we were able to resolve the situation through meaningful conversation.

Principal:  “Mrs. BoyMommy?  It’s Mr. Assistant Principal at school.  How are you today?”

Principal:  chuckles.  “Not every phone call from me is going to be bad news!”

And so it goes.  Medium is a bright, curious, creative child, and Hubby and I have tried very hard to encourage him in areas where he can excel.  The problem is, if he thinks he won’t excel, he won’t even try.  For instance, he was invited to a sports-themed birthday party last week, but he was apprehensive about going because “they’re all gonna be playing games and they keep score.”  I reminded him that his classmate invited Medium to his party because he likes him for him, not because he’s good or bad at sports.  He just wanted Medium to help him celebrate his big day.  When I went to pick up, however, the mom expressed concern that he didn’t have a good time because he didn’t want to play any of the games.  What a fun kid to invite to your party!

He possesses natural athletic ability.  He’s fast and agile and strong.  Obviously he gets all these qualities from me.  And maybe a little bit from my athletic husband.  My point is that it’s not like he’s making a fool of himself on the ball field.  He can hold his own, but if there’s any risk of failure, he won’t even start.

Hubby and I realize it is our job to help him find his niche, and we’ve never, in ALL our years of parenting school-aged children, pressured the boys to be straight-A students.  We want them to enjoy going to school, to be curious about their environment, and to build lasting relationships with their peers.  So it’s not as if he’s getting a lot of pressure at home to be perfect.  It breaks my heart when he comes home and tells me “I’m the worst student” because he’s struggling with math, or spelling, or reading, or writing.  I’ve tried explaining that we can’t all be good at everything; I can’t balance a checkbook and Daddy isn’t crafty, but it seems that he feels he’s good at nothing.

Don’t get me wrong.  I’m not a fan of the let’s-give-everyone-a-trophy philosophy either.  (And not just because I can’t stand having dust-catchers around OR because THIS 4-foot monstrosity is still taking up space in my home.)

In life, there are winners and there are losers.  Sometimes life’s not fair.  How else can one explain why good people get sick while Charles Manson rots away in prison?  It’s NOT fair; it’s just the way life works.  I know this is a life lesson that Medium must learn and that it’s our responsibility to guide him through it, but I’d like him to learn it with minimal therapy.

How do we help him feel good about himself and all he brings to our family without being unrealistic about his abilities?  How do we explain to a seven-year-old that his worth and his value do not come from a scoreboard or a report card or a blue ribbon?  I’ve been there - I have been the child who never gets picked for the team, or who never scores a goal, or who loses the election.  I know what it’s like to never feel like you’re the best at . . . well, anything.  And that’s okay.  We can’t all be rock stars.  I just wish he’d relax and go with the flow, man.  I want him to enjoy playing the game for the sake of having fun . . .  instead of feeling like he’s the worst just because he’s not the best.

Posted by boymommynyc at 8:15 AM 1 comments

After several (yes, that's plural) attempts at keeping up with my personal grooming and then documenting my horror story here and here and here,  let it be known that I had a bikini wax that was not the suburban mommy equivalent of waterboarding.  Seriously, if you haven't read about my hair removal misadventures, you really should.  I'm gonna win a Pulitzer.

I mean, it wasn’t like being licked by kittens, but neither was it torturous.

I decided, after my last two waxes with Lee the Nail Technician in the Seventh Level of Hell, that I would make an appointment at an accredited spa.  As much as I love getting advice on how to “make you husband so happy” from the same woman who paints my toenails, I figured it was time to see a professional.  The last two times I had a bikini wax, my eyes watered more than they did during that scene in Terms of Endearment when Debra Winger says goodbye to her children.

My self-esteem took a hit as soon as I walked into the spa, however.  I filled out the client questionnaire, because apparently it is important for the woman who is going to pluck hair from my body to know exactly how often I partake in recreational drugs and what brand of daily vitamin I take.  The aesthetician introduced herself to me and said, “so we’re doing an eyebrow wax, an upper lip wax, and a bikini wax?’

“Um, no, but why do you ask?”  My hand instinctively covered my upper lip, which apparently rivals Tom Selleck’s mustache, circa Magnum, P.I.

She got me situated in the room, which was decorated a little more soothingly than the Seventh Level of Hell room at Lee the Nail Technician’s House of Death.  AND she gave me those little paper undies.  Bonus!  She excused herself so that I could undress in private and figure out how to make the elastic on the paper undies fit around my waist without snapping from overextension.  I find it ironic that she waited outside in order to protect my modesty as I undressed, knowing that she'd be gettin' handsy with my nether-regions in a few minutes.

When she came back in she apologized for the mistake and said that there was another client with my same name who was having three waxes.  Well bless her hairy little heart; the poor thing.

We started making small talk, which helped take my mind off the fact that this woman is literally ripping hair from my very sensitive and generally very modest lady parts.

And then I starts with the jokes.

“So, when you went to beauty school, is THIS what you aspired to?”

She laughed and replied, “No, but it certainly helps me take out my aggression.”

Posted by boymommynyc at 9:57 AM 1 comments