My sister-in-law is pregnant with the spawn of my brother a precious gift of God.  They are due in early summer and will be first-time parents.  Remember those days?  You were filled with anticipation and had NO friggin' idea exactly how much you used to love sleeping?

At one of my baby showers, my girlfriend Mama Mia gave me some "advice."  (She bought me a real gift too, lest I never speak to her again.)  I have since added/adjusted/amended the list and given it as part of a baby shower gift.  Just another way for me to grace the universe with my unsolicited opinion . . .

PRACTICAL ADVICE
(which you may, of course, choose to ignore)
compiled by BoyMommy
CEO: BoyMommy Family Household

Posted by boymommynyc at 2:06 PM 2 comments

I’m living in my own personal Alfred Hitchcock film.

Below is a photo of the Swagga Wagon ONE DAY after I had it washed. 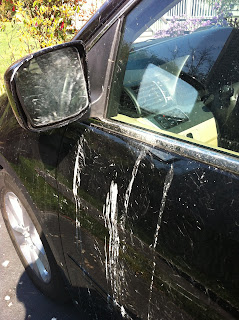 Does the offending bird not realize how much pride I got in my ride?

I hate birds.  Well . . . hate is a strong word.  Which is WHY I used it to describe how I feel about the avian species.  They’re fine to look at when they’re up in the sky, and I periodically enjoy listening to their tweet-tweeting as the harbingers of spring.

But that’s where I draw the line.

I will never have one in my home.  They stink, they squawk, and they sh*t all over the newspaper and then expect you to clean up after them.  No thank you.  (I feel similarly about fish, and you can read about how I explained my feelings to Medium here.)

About a week ago, I was out on the back deck with Small, who was playing in his sand box.  I kept hearing a thumping noise and realized that a bird was flying into the window of my neighbor’s back door.  Repeatedly.  Because the first time didn’t work, so let’s try it again.  And again!  Maybe THIS time!  THIS time?

Whatevs, I thought.  Just another character flaw to add to my list of reasons I hate birds.

But then he moved over to my window.  The next day, as I was sitting in my family room watching a week-old Desperate Housewives reading the Wall Street Journal during nap time, I was startled by a flying object that pounded into my window.  Repeatedly.  Because the first time didn’t work, so let’s try it again. . . . . you get the picture.

Now he has moved on to shinier pastures.  He has discovered my motor vehicle.  He keeps pooping all over my car.  I heard scratching the other day while the boys were playing in the driveway, and found my little friend perched on top of my side mirror – which was apparently the perfect angle for which to empty the contents of his little bird stomach with such force that it became lodged in the crevices of my mirror.  He is also partial to loitering at the base of the windshield so that when I use the wipers, I am presented with a rainbow of bird sh*t. 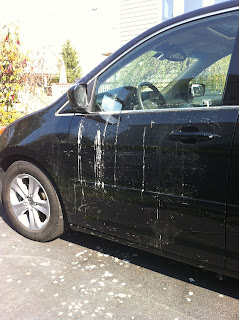 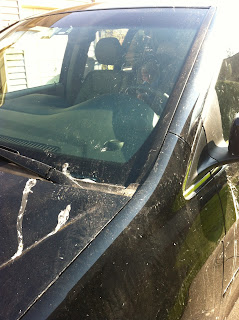 To top it off, he seems to be having some gastro-intestinal issues.  Perhaps it's the bird flu.  He delights in evacuating his bowels and then using his scratchy little claws to smear it all over the driver's side.  It's like he knows that's the side on which I enter the vehicle.  I'm telling you . . . for a creature with a brain the size of a grain of rice, he's proficient at playing mind games with me.

I told Hubby I am going to set up camp and shoot it with a water pistol, except all I keep thinking about is that line from To Kill a Mockingbird.  Atticus tells Scout, “Shoot all the bluejays you want, if you can hit ‘em.  But remember it’s a sin to kill a mockingbird.”  Miss Maudie later explains, “Mockingbirds don’t do one thing but make music for us to enjoy . . . but sing their hearts out for us. That’s why it’s a sin to kill a mockingbird.”

Well guess what, Atticus.  This bird doesn’t do one thing but sh*t all over my car and then get all scarce and stealth-like when it’s time to get yer wallet out at the car wash.

So if you need me, I’ll be sitting in a lawn chair next to my Swagga Wagon with a fully loaded water pistol.
Posted by boymommynyc at 9:27 PM 0 comments

Email ThisBlogThis!Share to TwitterShare to FacebookShare to Pinterest
Labels: it's gross. Why is it so gross?

The Spoils of my Vacuuming

A brief inventory of the stuff I just found under the sofa cushions while I was vacuuming:


The sound of the vacuum cleaner only muffled the sound of Small, who was safely standing 2 rooms away, repeating “is scawy” approximately 100 times (though I ball-park, admittedly,) and the dog, who barked as though I were entertaining a masked gunman for morning tea.
Posted by boymommynyc at 11:13 AM 0 comments

Back From Being MIA

I’m sure you’ve been sitting by your computer, waiting patiently for me to post a blog entry, and I apologize for being MIA for so long.  (Missing in Action, not the female rapper with the poor taste in maternity clothing.)  It has been a rough couple weeks.

Thing that prevented me from blogging #1: I had 3 family birthdays for which to prepare.


Thing that prevented me from blogging #2:  Illness.
Soon after Medium’s birthday party at the local cesspool of germs and infectious diseases children’s jumpy place, the BoyMommy family was struck by the stomach bug.  You know the one.  The one where there’s stuff shooting out of your body from every available orifice.  That one.

It started with Medium, but it was relatively minor so I honestly thought he was just a little dehydrated.  Nevertheless, I kept him home from school the next day.  But then I got it.  You KNOW your husband loves you when he says through the door, “are you okay, babe?  Are you getting sick?” and is answered with “I.  Need.  A Hair Tie.”  It’s the middle-aged equivalent of holding your hair back for you after a night of binge drinking.  Hubby slept on the couch for two nights because Large was soon struck and he and I were holed up in my bedroom.  Once we recovered, I had the pleasure of washing and sanitizing all the sheets and towels that had seen us through our illness.

Thing that prevented me from blogging #3:  Hubby is on a Guys’ Weekend.  For SEVEN days.

He certainly deserves a break.  He works hard, he works long hours, he commutes an hour each way, and he does a lot of extracurricular stuff.  He’s an elder at our church, he teachers Sunday school, he is Vice President of the HOA and a member of the Finance Committee, and he coaches two baseball teams.  I admire his commitment to life outside of work.

Guess who has to hold down the fort while he’s gone, either at work or at play?  Guess who does all the behind-the-scenes stuff that allows Hubby the time and availability to be all volunteery?

When I get angry at him, I tell him it’s The Hubby Show, and the boys and I are merely supporting cast members.  That’s honestly how I feel sometimes, so I’m going to vent a little.

It’s hard not to be a little resentful when Hubby picks up and leaves for seven days for a fun trip – not because I don’t think he deserves it, because he absolutely does, but because I know I could never just go somewhere for seven days.  Even while I was sick and pukey and headachy and had body aches, I still had children to care for and Hubby still had to go to work.  (This is the man who went to work during the afternoon Medium was born.  Medium was born at 9:32 am.  Circumstances were such that Hubby was back in the office around 2.  Poor planning to deliver a child during “Busy Season!”) 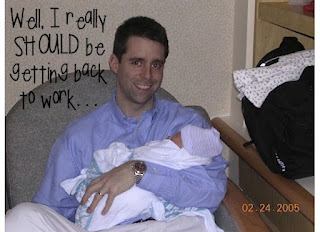 First there’s the Mommy-Guilt.  I have no idea why I feel like I have to be the martyr.  Since when do I hold myself to such a high standard?  Seriously, have you seen the way I dress/cook/clean?

A little back story: I am going away this weekend with a girlfriend.  We originally planned our trip for the 1st weekend in January, but Hubby suggested we try a different date because we had so much going on that weekend.  So we chose another weekend, and then some family stuff came up and I again had to reschedule.  Now, here it is, the middle of March, and it looks like we’re finally going to be able to have our girls’ weekend, and I feel guilty for going 2 nights instead of just the one.

Second, I have to do all the scheduling, no matter who leaves.  Since Hubby has been gone, I have done all the picking up/dropping off for Scouts, baseball practice, etc.  No problem – it’s all part of the job.  But in order for me to enjoy a r-e-l-a-x-i-n-g weekend, first I need to arrange for sitters and/or transportation for the kids for Friday and Saturday on Hubby's behalf.

Third, I will think about my children the entire time I’m gone.  I’m not saying I won’t enjoy myself, but I’ll wonder what they’re doing, what they’re having for dinner, how practice went, is Daddy letting them stay up too late, and are they watching inappropriate tv programming?

Yes, intellectually I think I deserve a little time off too.  So why do I feel so guilty about needing a break every once in a while?

Posted by boymommynyc at 2:37 PM 2 comments