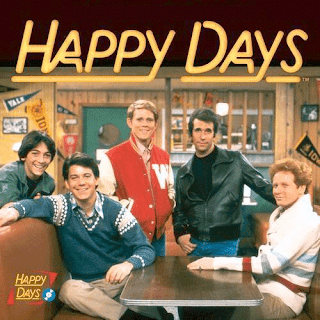 My Kid's a Medical Marvel 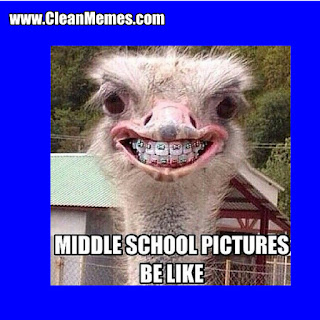 I read somewhere on the world wide internets that certain people are cut out to parent certain types of kids.  I’ve always said I think I was meant to be a boy mommy.  I just don’t think I was cut out to have girls.  I love girls; I have nieces whom I adore.  But for the day-to-day, I don’t see myself guiding a young girl into womanhood.  Granted, I’ve never actually BEEN a pre-pubescent boy and I know that there are all kinds of “surprises” in store for me within the next few years of my boys being in middle school, but I still think I’ll be better at boys than I would have been at girls.

I was, however, a very awkward pre-pubescent girl once, and it weren’t pretty.  For some reason, I cut my hair short so that I looked like a middle-aged soccer mom trapped in a 13-year-old’s body, like I should be balancing a Virginia Slims cigarette precariously on my lower lip while spilling red wine everywhere and yelling at my peers to get off my lawn.  My pants legs were always too short approximately one week after we purchased them, but in the name of frugality, there was no way my mom was going to buy me a new pair of jeans.  To top it off, in 1987, suspenders were “in.”  Remember?  No?  Just me?  Anyway . . .  How does one wear suspenders when she is an awkward pre-teen with brand new boobs?  Do the suspenders go inside the boobs, so that they look like a giant hourglass?  Or do they go outside the boobs, so they look like giant parentheses?  I’m awkward from sheered head (BOOBS) to Bass Weejuns!  To top it off, I’m pretty sure I had a raging case of PMS for the entirety of the years 1986 and 1987.

I think that my middle school years were a practice run.  God watched it all and thought: boys.  We’ll just go with boys.  So in 2003, he gave me one.

Apparently I’m not so great at raising boys either. Even though my mother-in-law periodically reminds me that none of her three boys every broke a bone, I cannot say the same.
At age 7, Large had a well-fed 2nd grader fall on top of him during a game of tackle and he broke his collarbone.  He’s also had a run-in with a wayward swing (it’s complicated) and he had a freak just-walking-down-the-hallway-at-school accident.  Kid’s got his mama’s natural grace.  Medium’s non-existent ninja skills at a mall play area earned him a cast when he pretended to be running his own parkour course.  Turns out he’s not very good at it.  The only one I had left was Small.

A few weeks ago, Small and Medium were actually getting along, for once.  Naturally this caused the earth to fall off its axis in preparation for the imminent apocalypse, and Small broke his finger trying to catch a football.  He came inside, showed it to me, and told me it really, really hurt.  I took one look at it and my powerful mother’s intuition told me that a pinky is not supposed to be turned in that direction.  Off we went to Patient First, and I literally chuckled when the receptionist asked me if we had ever been there before.  (My monogrammed parking spot out front shoulda been her first clue.)  After three weeks in the cast, we went to get it removed, but Small’s finger hadn’t yet healed completely, so he had to wear another one for 2 weeks.

Keep in mind that at six years old, he’s still pretty active.  Some might even use the word “rambunctious.”

Small’s pinky and ring finger were both inside the cast - the ring finger serving as a sort of splint for the pinky.  He complained a bit last week that his finger was hurting.  I figured he scraped it or that perhaps the cast was rubbing and irritating his skin, and I reassured him that it could not be broken, because it was already inside a cast.  Go home Mommy, you’re drunk. 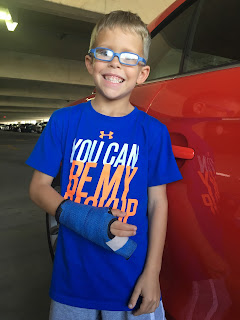 When we had the cast removed, I immediately noticed that while his pinky looks as good as new, his ring finger was swollen and purple, and he couldn’t bend it into a fist.  When the xray technician took him back to look at the pinky, I asked real sweet-like if they could maybe just sneak a peek at that ring finger too.

Small actually broke a finger that was already inside a cast.  The doctor was very sweet but admitted that she had never seen anything like this happen before.  Look at that – he’s a medical marvel.  This must be what the first kid to ever get Polio felt like.

Posted by boymommynyc at 8:59 AM 0 comments

The intellectual bank of BoyMommy is overdrawn.

Like many of you, I look at other women and think, “I don’t know how she gets it all done.”  I have friends and neighbors who always seem to have their sh*t together, and I feel like I’m one microwave meal away from a room with padded walls.

I’m busy.  I’m the president of the elementary school PTA, I’m on the board of the local Little League, I’m working on my Master’s Degree, and then I have this little gig called parenting.  I love all of these things and don’t want to give any of them up.  I love being in the school, I love being involved in an activity that my entire family holds dear, and I love that I’m finally doing something for myself by thinking of my own future.  Of course, all this is secondary to my day job, which primarily consists of keeping three boys alive while feeding them nothing but grilled cheese and chicken nuggets.  It’s not like I’m spending my days going all Martha here at home.

I get in bed every night, exhausted, but my brain is all swirly.  I lay there and think of inane topics until I finally shut down about an hour later.  It’s like there’s no twilight for me; it’s all fluorescent lights and then darkness, and somewhere in there I’m supposed to relax enough to sleep.

So last night I wrote some stuff down.  Obviously these are extremely important items that my brain thinks I MUST consider before shutting down: 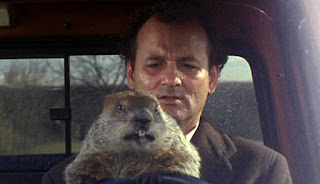 1.  I wonder what Bill Murray’s favorite movie is.

5.  I need to make a decision about kitchen paint color. 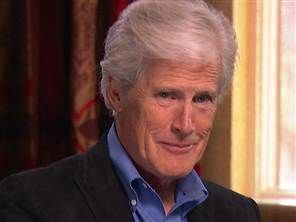 9.  Was Ione Skye in any other movies besides Say Anything?  I’m gonna have to google.

10.  I wonder if birds know how stupid they are.

I know you feel me, moms.  What stupid stuff is taking up residence in your brain where knowledge used to be?

Posted by boymommynyc at 9:07 AM 0 comments